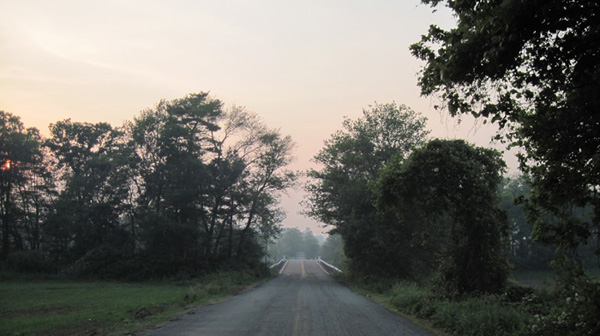 The "Bridgewater Triangle" is an area in southeastern Massachusetts where a wide range of paranormal activity has been reported. This area is centered around the Hockomock Swamp in Bridgewater and includes the Freetown/Fall River State Forest and Dighton Rock State Park, along with other places associated with many local stories and legends. The Hockomock Swamp itself seems to be a focus of paranormal activity. Many people report a feeling of being watched as they fish or hunt in this dense wilderness. UFOs are frequently seen in the Triangle area, often by people driving along Route 44. Reported UFO sightings go back to the 1700's, and there have been many sightings in recent decades. Some of the sightings involve encounters at close range or with landed UFOs. Bigfoot creatures have also been seen there repeatedly for years, usually entering or exiting the swamp, or creeping along its borders. In 1970, the State Police staged a hunt for Bigfoot, calling it a "giant bear", though no bears are believed to live in the area! Giant birds, lake monsters, panthers, and other mysterious or out-of-place animals have also been reported. According to legend, local Native Americans have considered the area haunted or sacred since prehistoric times. They are said to tell many legends about the swamp, which they call "evil spirit place." Paranormal events have been associated with their sacred sites, such as an ancient burial ground in the swamp, and Indian Rock. The news media have reported cattle mutilations in the State Forest, attributing them to Satanic cults, and there have been grisly murders committed there by admitted cult members. There are a great number of places in the "Triangle" that are said to be haunted, and ghost encounters are common. Please check out the articles below to read the full and true story about the Bridgewater Triangle.

My article about the Bridgewater Triangle, copyright 2010 Christopher W. Pittman. Includes maps of the area.

Witness Accounts More stories by witnesses to strange phenomena in the area, in their own words. Last updated 23 May 2010

Weird Triangle Evidence? Read about the strange material I found on 4/14/01. At first, it seemed like it might be evidence of Bigfoot. But eventually, a prosaic explanation was found.

Boston Globe article, October 30 2005 This article contains comments from the editor of this web site.

Taunton Gazette article, May 14 2006   The author of the article calls this site "worth a read."

Ghost Photograph Check out this intriguing image and read the account of the witness who photographed what appears to be a disembodied face in an apartment in the "Bridgewater Triangle."

Lake Nippenicket witness account by Marc Svirtunas I often get e-mails from people who report a strange feeling of being watched in the Hockomock Swamp area. Marc Svirtunas sent me this detailed and intriguing story. New 27 September 2010

"I lived in Taunton for nearly 15 years... I do believe that this area borders on the Raynham line near the dog track. I have travelled that road too many times. Also had to hitch hike through there in the mid seventies.
"I was working in Stoughton, MA at the time, before I had even heard of the place I got very strange feelings about the swamp that borders both sides of Route 138. There were a few times I thought I saw things walking in the woods there. Especially around 6 AM some of the mornings when I used to have to get to Stoughton by 7 AM for work. I can honestly say I never had any luck getting a ride through there, I think the people driving by had other things on their minds..."
-former Bridgewater Triangle resident

"I used to hunt the area for deer with my family.. we used to see different things- some explainable, some guesswork- but it has always led me to believe something is different about the area... and wanting to find out more..." -Another Bridgewater Triangle resident, 2007

Back to Massachusetts UFO Resource Site 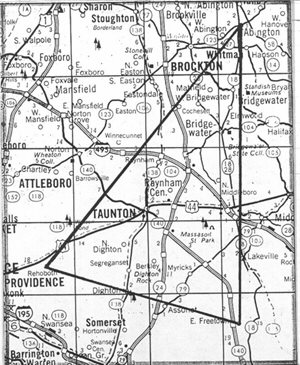